How we used the power of the follow up to get the Close.com domain

Just a few weeks ago, we announced our rebrand as Close and shared the news that we purchased the close.com domain name.

First off, thank you for all of the overwhelmingly positive feedback and praise! We’ve been fielding tons of great questions, messages, and tweets over the past couple of weeks, so please keep them coming.

And today, I wanted to take a few minutes to answer by far the most frequently asked question I’ve been getting since the rebrand… how the hell did you get the close.com domain?!

It’s a great question, because five-letter .com domains can go for many millions of dollars when they’re a word as common as close. And because our journey to becoming a profitable company has been funded entirely by our customers, we didn’t have millions of investor dollars just sitting in the bank waiting to be deployed for something like a domain name.

So, given these constraints, how’d we do it?

The answer is… Five and a half years of following up.

It took five and a half long years of back and forth negotiations to get close.com.

Not too bad right?

While this is certainly one of the most time-consuming deals I’ve ever worked on from start to finish, we’ve always had a very clear purpose driving our motivation to acquire the domain—which helped immensely in guiding the deal to a finish that made sense for us.

Why we wanted the .com in the first place

Pretty much immediately after we pivoted from Elastic Sales to working solely on Close, we knew we’d want to own close.com if we could. Who wouldn’t, right?

Now, at the time, we had a growing CRM product, but it was far from proven in our industry—and we certainly didn’t have capital to allocate toward buying a domain that didn’t promise any real immediate return on the (hefty) investment.

A lot has changed since those early days. We’ve become a much more mature business with thousands of happy customers. And as the years went on, we acquired more customers and more people calling us “Close,” which is the name we’d been adopting internally as well.

Beyond just the benefits of properly aligning our brand with the .com name, we knew that owning this domain would illustrate to future customers that we’re here to stay for the long haul.

When the negotiations started

Back when we first launched Close, there was another startup named Close in the social networking space that had already registered the .com domain name and raised a bunch of investor funding.

Knowing the nature of how unpredictable it can be launching a startup, I met and connected with the founder of that company five and a half years ago when they were still early on in their journey.

Right away, I expressed our intentions and asked if we could get the first opportunity at purchasing the domain from them if anything ever changes on their end.

At the time, they were still building their product, they had a healthy runway and it was all looking exciting. So, his first reaction was to say, “that’s impossible. We’ll never sell!”

He gave me a bunch of compelling reasons for why it wasn’t the right time for him to sell and that he didn’t believe he ever would, so I resorted to doing what we do best… set a follow up reminder to regularly check in and see if his situation would change over time.

It’s easy to focus all of your efforts on that initial outreach email, conversation or pitch. You’ve confidently made your request, laid all your cards down on the table, and now all that’s left is sitting back and waiting for their excited response.

Like it or not, that’s not the way transactions play out in the real world.

Regardless of what you’re selling—or buying for that matter—it’s important to remember that a no today, doesn’t have to be a no tomorrow (or five and a half years from now).

Even if you get nothing but radio silence after attempting to make contact, that doesn’t mean the deal is dead. It takes time and effort to capture the attention of busy people.

When you know exactly what you want and you’re in it for the long game, there’s always the possibility of making a deal happen.

So, once per quarter, I’d ping the owner of the domain to check in and see how things are going with his startup.

At first, there wasn’t much to hear—still working on building the product and getting some initial traction with beta users.

After a year of working on their idea though, the business wasn’t really taking off the way they’d anticipated. Things weren’t looking as promising anymore, but he still didn’t want to sell the domain yet despite starting to fold up the operations of their startup.

That’s when he began entertaining the idea of giving the domain to one of his investors who was working on something else with a Close-related name. That didn’t ultimately pan out either though, and he was then just sitting on the domain with a static landing page advertising a social networking app they were no longer working on.

All along, I was regularly following up every three months, nurturing the relationship, checking in and to see if he’d changed his mind.

Fast forward to year three of these regular follow ups and check-ins, I kept offering him the same (very humble) price for the domain, seeing that it was sitting unused for all this time.

With each conversation we’d have, he continued to reiterate that he wanted to sell the domain name for a much, much higher price point so that he could make his investors whole again now that his startup had shut down.

For now, the gap between our maximum and his minimum was too wide to meet in the middle and leave both parties happy enough to make the deal.

And still… I kept following up once every quarter.

It wasn’t until about a year and a half ago that we finally got into serious negotiations.

With all the time that passed, he started to be more flexible on the original price he’d given us, and we were also growing to a point where we could afford to spend more as well.

We worked really hard to structure a deal that worked in everyone’s favor. That meant:

Everything was finally lining up and the deal was looking like it’d actually materialize.

But, at the last minute, we decided to pull out once the contract had already been sent to us.

At that very last step, something just didn’t feel right.

Call it founder’s intuition—because after having a conversation with the founding team and running through the pros & cons of making this move right now, we decided as a group to pull the plug. It wasn’t the deal we were all excited to make at the time.

Here’s what we knew…

Plus, I’d built a strong relationship with this founder over the last five years, so if another competitive offer came in from a different buyer, I expected to get a courtesy heads up.

Still, this deal wasn’t right for us as is. So we took the sale away and just waited…

We waited much longer than we normally would, without any follow up…

Nearly a year went by after we decided not to sign the previous contract, and then…

The seller reached back out to us first.

It wasn’t to tell us about another potential buyer, but rather to ask if we’d be interested in coming back to the table and seeing if we could strike a new deal now that some time had passed.

In that moment, a lightbulb went off. I knew that we had at least some sort of leverage. When he began pursuing us, it signaled that the tables had turned to some degree.

What ensued was A LOT of back and forth for the better part of a month—dozens of emails and phone calls with the seller and our leadership team to land on a mutually beneficial transaction.

Ultimately, we were able to come up with a deal that was much better for us.

We avoided taking a big hit to our cash flow (which helps us keep delivering the best sales communication platform on the market today) and got the domain at a lower overall price than we originally thought possible.

Now, before you ask in the comments below… Out of respect to our agreements with the seller—we’re not able to disclose the sale price or dive into any more particulars of the transaction today.

What we can say however, is that making this deal happen took a lot of persistence, dozens of follow up emails over the course of five years, and multiple rounds of contract negotiations to finally land close.com.

Using Close throughout this process was integral to managing my relationship with the seller, keeping track of the complexity of all the details that spanned across dozens of email threads, and in queueing up the regular follow ups that made this possible.

If you want to grab all of my best follow up strategies, download your free copy of The Follow-Up Formula today.

Try out the new Close today

A lot has changed this year inside our CRM for SMBs. We've added tons of impactful new features, fine-tuned the classic ones that keep our customers coming back for years, and we've got much more in the works.

Start a free 14-day trial (no credit card required) and see for yourself why thousands of salespeople around the world use Close to scale their sales process and convert more customers. And if you sign up now, you even get full access to all of our best sales templates, checklists, books, and more! 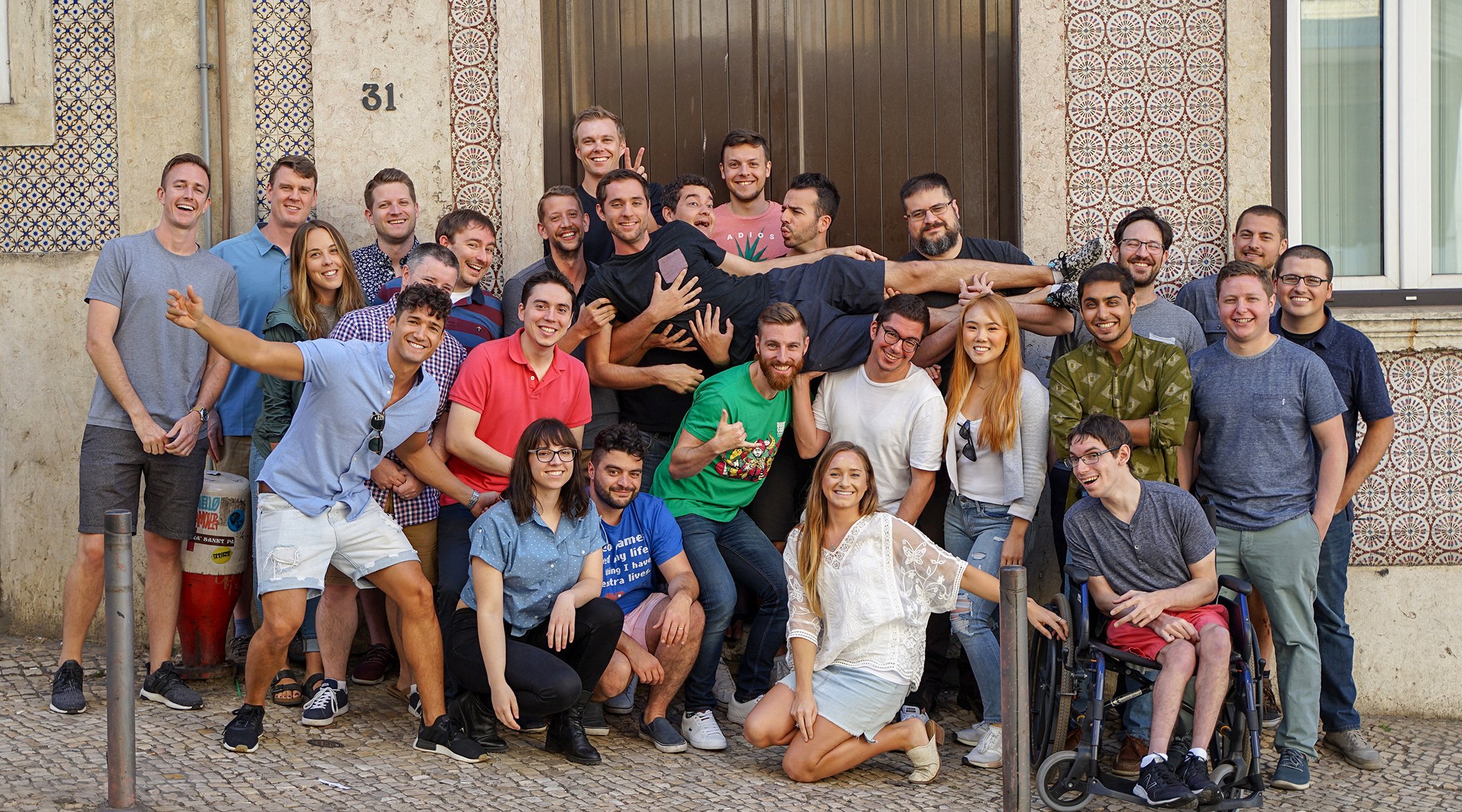